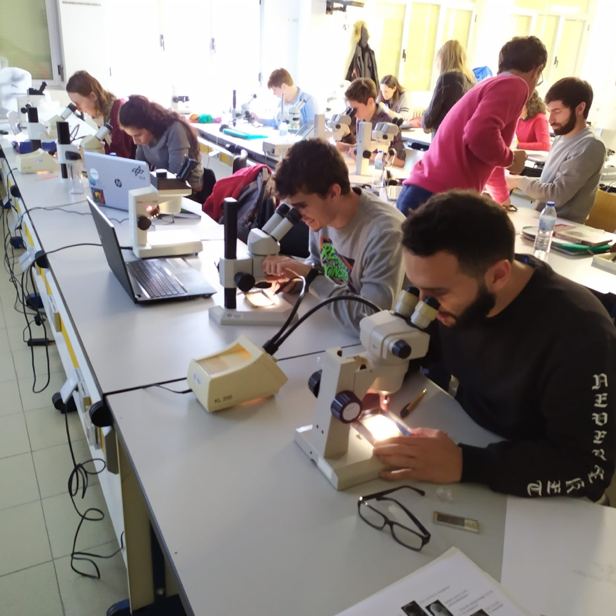 Modern and ancient oceans short course in Salamanca was organized by local host Dr. Francisco J. Sierro from the University of Salamanca (USAL) with the help of his PhD students (Lucía Alonso Azibeiro and Francesca Bulian) and IPGP management team. 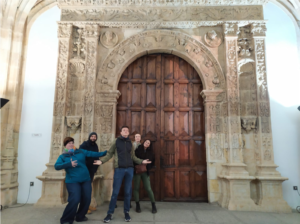 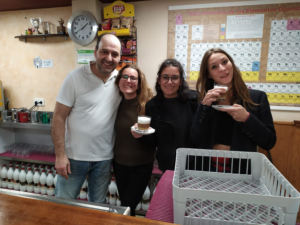 On the left : Some of the ESR students during their stay in Salamanca

On the right: Enjoying some Spanish coffee during a coffee break in between lectures

During the five days spent at the department of Paleontology of the USAL, different subjects were tackled, the majority revolving around the multiple aspects of ancient oceans: starting from the Climate system and the role that oceans play in it (Dr. Francisco J. Sierro-USAL, Dr. Giovanni Aloisi-IPGP) up to the microplankton and isotopes that can be found in their waters. Furthermore, the ESRs were presented in detail with the dynamics of evaporite deposition and paleoenvironments (Dr. Francesco Dela Pierre-University of Torino-UTOR) as well as the analytical methods usually used to investigate the latter (Dr. Jörn Peckmann, Hamburg university-Uham, Federico Andreetto, Utrecht University-UU), all crucial while studying a salt giant. This course, being held by a multidisciplinary project, didn’t only address the chemical and geological aspects of ancient oceans dynamics and evaporite deposition. Dr. Terry Mcgenity (University of Essex-UEssex) explained all about microbes and the extreme conditions in which they can live, both in oceans and evaporitic rocks.

Towards the end of the week, the ESRs couldn’t miss the opportunity to visit the Laboratory of Stable Isotopes and Noble gases where Dr. Antonio Valero (USAL) explained how different stable isotopes that geoscientists commonly used for paleoenvironmental reconstructions were measured.

Of course, no visit to a Paleontology department can go without entering the micro-paleontologists (in this case) shoes and taking a look into the microscope and see all the creatures that sea sediments are hiding. 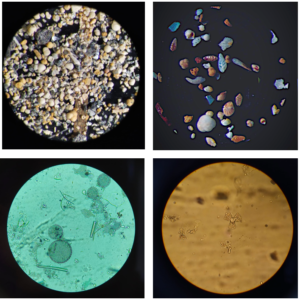 Some striking captures taken during the micropaleontology practice. The first two pictures show some zooplankton and benthos (Foraminifera), while the other two some phytoplankton (Diatoms).

The practical part of the workshop started with an introduction to phytoplankton; Alba Gonzalez Lanchas and Dr. Jose Abel Flores (USAL) explained all about Coccolithophores while Diatoms were presented by Dr. Andres S. Rigual Hernández and Dr. Maria Ángeles Bárcena Pernía (USAL). The world of Zooplankton followed with special focus on Miocene Foraminifera both planktic and benthic which were described by Francesca Bulian, Lucía Alonso Azibeiro (USAL) and Dr. Antonio Caruso (University of Palermo, UNIPA). Friday the practical session was closed by Federico Andreetto (UU) and a lesson about Ostracodes, a class of small crustacea. 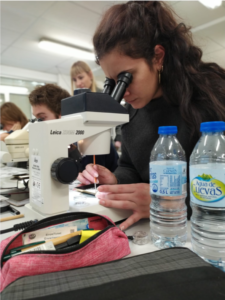 ESRs at the micropaleontology practical part of the course.

In spite of the full learning schedule, in the evenings the participants still found some time to stay together, both students and lecturers and to discuss all the different aspects of the Messinian Salinity Crises from a micropaleontologic perspective and inspired by the new knowledge acquired, organize future collaborations.